Bacon makes everything better! Smoky, savory, and a little salty, it's the perfect accent to just about everything. Bacon and White Cabbage Gratin combines the classic duo in an easy and elegant dish that is sure to become a favorite side.

There's something just warm and cozy about cabbage that is perfect this time of year. Whether it's a main like Sheet Pan Orange Glazed Chicken with Cabbage, or this hearty and comforting side, it's an easily accessible ingredient that is a canvas for flavor.

When you start with bacon, you already know you're in for a delicious meal. Bacon and cabbage in general are a traditional pairing. Bacan and White Cabbage Gratin elevates that combination yet only requires a handful of simple ingredients.

How to Make Bacon and White Cabbage Gratin

Armed with a cast iron skillet and less than 40 minutes, this decadent and delicious side goes from oven to table with ease. Creamy yet a little charred and crispy, savory, and completely irresistible, this side is easy enough for any night of the week yet special enough to serve for an occasion.

Charred cabbage is combined with bacon and baked with heavy cream for a simple side with bold flavors.

Gruyere cheese is an ideal melting cheese and a classic component for gratins. However, you can use other types of melting cheeses for this dish. Emmental, Fontina combined with parmesan cheese, Jarlsberg, and cheddar are other options. The flavor won't be quite the same but they are all great choices for melting.

Using a cast iron pan for this cabbage and bacon recipe allows you to not only char the cabbage, giving it even more flavor and texture, but also easily transfer the skillet from the stovetop to the oven.

Leftovers can be stored for up to three days in the refrigerator. Either transfer to an airtight container or allow your cast iron skillet to cool and then cover. The leftovers can be gently reheated in the microwave.

This recipe for cabbage gratin is as much about the texture as it is the flavors. After removing your bacon from the pan allow your skillet to come back up to temperature before adding in the cabbage. You want the pan to be hot so you get some char on both sides of the cabbage wedges. 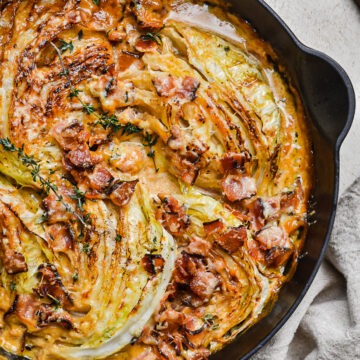