Labor Day is just around the corner and that means it's time to invite friends and family over and toast the end of summer with the best of the season. Elote en Vaso is an easy and delicious treat that is sure to be the hit of any party.

There can never be too many corn recipes this time of year, like Spicy Corn Chowder Salad. The days might be a little shorter and fall might be just around the corner, but what better way to celebrate the last days of this season than with a summertime favorite?

Not only is Elote en Vaso a crowd-pleasing dish that's easy to make, but it also requires minimal ingredients. This is sure to become a dish the entire family will love!

How to Make Elote en Vase

Not only is this a quick and easy dish to make, it's also the ultimate make ahead dish as it only gets better as the flavors marry and the corn marinates a little in the sauce.

The only cooking require for this fresh and vibrant dish is grilling your corn. So fire up the grill and get out your tongs. Elote en Vaso is sure to become a family favorite.

While this dish is absolutely best with fresh corn, you can make it all year long. Replace the fresh corn with defrosted frozen roasted corn. The texture and flavor won't be as pronounced but it will allow you to create this dish all year long.

There are no special tools required to make this quick and easy dish. The corn can be grilled outside on the grill, or indoors on a grill pan. You are just looking to slightly char the corn.

In addition, while this dish is perfect served in individual cups, you can also serve it in a large bowl.

Elote en Vaso is a dish that can be made ahead of time and actually gets better as it refrigerates, allowing all of the flavors to develop. It can be stored in an airtight container in the refrigerator for 3-4 days.

Skip chasing kernels of corn all over your kitchen counter. The easiest way to cut corn off the corn is by inverting a smaller bowl into a large bowl. Place the bottom of your corn cob onto the small bowl and slice down, allowing all of the kernels to pool into the bowl instead of on your counter. 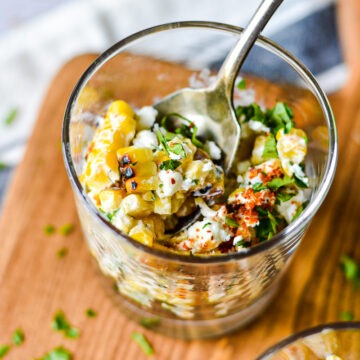