Sunset comes a little sooner and the days are cooler as fall is in full effect. What better way to warm up than with a cozy bowl of soup? French Onion Soup with Cabbage is a delicious and comforting twist on the classic.

Soup is always the right answer, regardless of the season, such as Sopa de Fideo. Whether you're looking for a hearty dinner or warming lunch, this twist on the traditional French onion soup is sure to become a new favorite.

The best part of French Onion Soup with Cabbage, other than how easy and delicious it is, is how budget friendly and easy to shop for this recipe is. Fresh, accessible ingredients come together with pantry staples for this cheese topped classic.

How to Make French Onion Soup with Cabbage

This soup gives you all the flavor of an all-day simmered soup, but with the ease of it coming together in less than a couple of hours. This is also a great make ahead. You can finish the last step of baking it to get that melty, crusty cheese just before serving.

This soup can easily be made vegetarian. Simply replace the beef broth in this recipe with your favorite vegetable broth.

Part of the fun of French onion soup in general, and French Onion Soup with Cabbage, is the individual portions with the crown of melted cheese hugging the croutons. Use oven safe ramekins, mini crocottes, or crocks.

However, if you don't have ramekins or crocks, this can be transferred to the oven in a Dutch oven. Top the entire soup with the croutons and gruyere, and bake for 10 minutes.

This soup is a great make ahead. You can make the soup itself and allow it to simmer, and then let it cool. Once it's cooled transfer it to an airtight container and keep refrigerated for 2-3 days. When you're ready to serve it, reheat it and then transfer it to your cooking vessels.

The caramelized onions are the backbone of this soup. Don't rush the process. If they seem like they are cooking too quickly lower the heat and continue allowing them to cook until they turn a golden brown. You can also add a splash of water to them to help draw out their sugars. 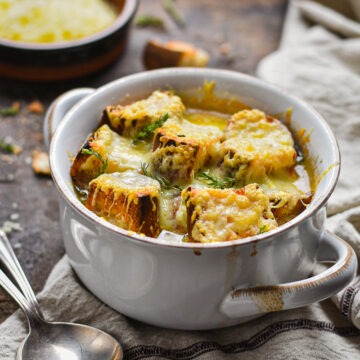 This same recipe can also be baked in an oven safe Dutch oven. Top the entire thing with the croutons and cheese and bake for 10 minutes.
Tried this recipe?Mention @uncomplicatedchef or tag #uncomplicatedchef!
« Baked Apples with Brie and Walnuts
Orange Cranberry Torte »