Is there anything more comforting than a bowl of noodles? Sopa de Fideo is the ultimate way to usher in the fall and warm up all season long.

I love soup season. Dishes such as Chicken Sausage and Cabbage Soup always just feel so warm and cozy. This take on the Mexican classic noodle soup will make both kids and adults feel like they've been hugged.

Not only is this a quick cooking Sopa de Fideo perfect for lunch or dinner, it also requires only a handful of ingredients.

How to Make Sopa de Fideo

This quick cooking soup is a perfect weeknight meal served with tortillas or cozy fall lunch.

Skip the canned soup and make this light yet warming and comforting soup from scratch!

If you cannot find fideo noodles, you can replace them with spaghetti. Simply break the large spaghetti noodles into smaller pieces and proceed with the rest of the recipe.

This soup makes for great leftovers. Simply store it in an airtight container in the refrigerator. When you're ready to reheat, you may want to add additional chicken broth to thin it out as the noodles will absorb the broth.

Take your time and allow the fideo to toast. If they seem like they are starting to burn, turn your heat down and continue to stir them until they are golden and have a nutty aroma. 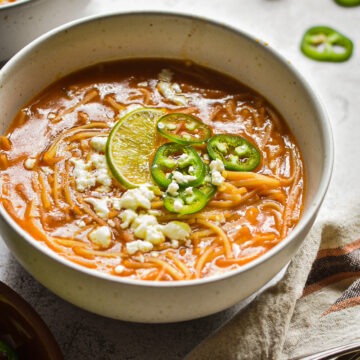